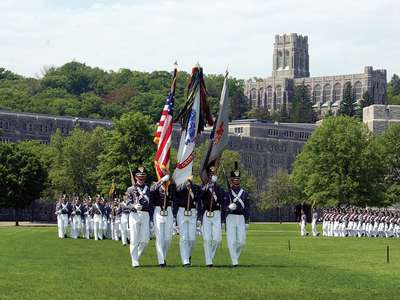 The U.S. Military funds the college education of service members through a number of programs and institutions. These include the Reserve Officer’s Training Corps (ROTC) the United States Military Academies, and programs for the Reserves and National Guard. The college educations of military veterans are administered by the U.S. Veterans Administration and are funded by what is known as the “G.I. Bill”.

The U.S. Military should be considered by high school students who aspire to attain a college degree but are unsure of how to obtain sufficient financing for it. Students can achieve their educational goals and serve their country by committing to military service.

The purpose of ROTC is to develop and train qualified young men and women to become commissioned officers in the Army, Navy, Air Force, and Marines. ROTC participants get admitted to and matriculate at a college like any other student. As ROTC cadets, they take special courses as part of their undergraduate curriculum and receive credit for them as electives. They receive basic military and officer training for their chosen branch of service through the ROTC unit at their college. Cadets participate in regular drill during the academic year and full-time field training in the summer.

According to most graduates of ROTC programs, it’s well worth the extra effort required. However,  there is a common misperception that all students who participate in ROTC will automatically receive an ROTC scholarship. Many students graduate from college with a bachelor’s degree and complete a ROTC program after bearing their own college expenses or receiving financial aid by other means. They do so because it’s their ambition to serve in the military as commissioned officers. All cadets that contract into the ROTC program after sophomore year will, however, receive a $420 stipend each month.

ROTC applicants are eligible to earn scholarships that are based on merit. The primary type of ROTC scholarship is the four-year program covering tuition, room and board, books, and fees. Four-year scholarships are awarded to high school seniors based on a national competition. Cadets can also compete for three-year scholarships while they are in their first year of a ROTC program at a college.

Each year, more than 4,000 scholarship winners are selected from over 25,000 applicants. Depending upon the college involved, a ROTC scholarship, since it covers tuition, can be worth $80,000 or more. Winners also receive a stipend of up to $5,000 per year.

During the first two years, ROTC cadets incur no post-graduate military obligation unless they’re a scholarship winner. An obligation begins in junior year if a cadet chooses to enter into a contract with ROTC to become a commissioned military officer upon graduation.

Cadets who enter into this contract receive a $420 per month stipend until graduation. The service obligation that they take on is eight years and can be served on active duty, National Guard, Army Reserve, or a combination of these types of service.

The admissions process for the academies is intense and competitive. The Army, Navy, and Air Force academies require a prospective applicant to submit a form with extensive personal information. The academies then conduct qualifications reviews. Students who  are approved are provided with an application form to complete. Admission differs from other colleges in that applicants are required to be nominated before they can be considered for admission. Only U.S. Representatives, U.S. Senators, the Vice President, and the President may make these nominations. The exception is the Coast Guard Academy, for which applicants contend in a national competition that does not require a nomination.

The academies are United States public educational institutions, so the Federal government covers full tuition and the other expenses of cadets and midshipmen. Upon graduation and the receipt of a bachelor’s degree, the graduates become commissioned officers in the U.S. military. They are obligated to serve a minimum of five years of active duty followed by three years in the Reserves. All of the academies are coed.

The Naval Academy has an enrollment of 4,594 midshipmen. It’s tied for #6 in the 2022 U.S. News & World Report rankings for National Liberal Arts Colleges. The admission rate is 9%.

The Military Academy has an enrollment of 4,536 cadets. It’s tied for #11 in the 2022 U.S. News & World Report rankings for National Liberal Arts Colleges. The admission rate is 9%.

The Air Force Academy has an enrollment of 4,307 cadets. It’s tied for #22 in the 2022 U.S. News & World Report rankings for National Liberal Arts Colleges. The admission rate is 13%.

The Coast Guard Academy has an enrollment of 806 cadets and is ranked #1 in the 2022 U.S. News & World Report rankings for Regional Colleges North. The admission rate is 13%.

The Servicemen’s Readjustment Act of 1944, commonly known as the G.I. Bill, was a law that provided a range of benefits for returning World War II veterans. The original Act expired in 1956, but the term “G.I. Bill” is still used to refer to programs designed to assist U.S. military veterans in obtaining an education. The U.S. Department of Veteran’s Affairs (VA) administers G.I. Bill programs.

The G.I. Bill provides an incentive for young men and women to enlist in the military as a way to pay for college. In exchange for military service, the GI Bill covers tuition and fees at the in-state rate for veterans attending public colleges. A person may be eligible for G.I. Bill educational benefits if they’re not a veteran but are the child or spouse of a veteran for whom one of the following conditions is true:

An honorably discharged veteran can receive up to $1,265 per month in tuition assistance from the military for 36 non-consecutive months while enrolled in a public institution and up to $1,000 per year for books and supplies. Thirty-six months of assistance covers nine months of school per year for four years, which is what’s normally required for an undergraduate degree. If a veteran chooses to attend a private or foreign institution, he or she is eligible for up to $25,162 per year in assistance. Tuition payments are made directly to schools.

The Forever GI Bill STEM Extension was created to encourage veterans to pursue fields that require more than the 36 months of benefits that are normally funded, This extension, if granted, will pay a veteran up to nine additional months of regular benefits or a maximum lump sum payment of $30,000.

Eligible veterans have 15 years from the date of their discharge to use their benefits if they served in the military prior to 2013. Beginning in 2014, benefits never expire. Veterans may stop and re-start their education as they wish over the rest of their lives.

There are two steps in applying for VA benefits. First, select a college or training program that’s eligible under VA rules. You can find a list of these schools on the VA website. Second, submit a VA Form 22-1990 to your VA Regional Processing Office.

Members of the Army, Navy, Air Force, Marine Corps, and Coast Guard Reserve are also eligible for benefits under the G.I. Bill.  The primary job of the Reserve is to fill the gaps in stateside service positions when the active duty forces ship overseas. If you enlist in the Reserves, you take on a minimum eight-year service obligation. As a Reservist, you have an in-service requirement of 90 days before you can apply for educational benefits. You will then be eligible to serve part-time in the military and go to college at the same time under the same G.I. Bill benefits noted above. Your obligation to the Reserves will be to participate in training for one weekend each month and two-weeks full-time in the summer. Your school will receive direct payments for your tuition and other expenses.

The National Guard consists of the Army National Guard and the Air Force’s Air National Guard. While Federally funded, the National Guard is organized and controlled by each state. National Guard personnel are also entitled to benefits under the G.I. Bill. Those who qualify receive a monthly expense allowance of up to $384 up to a maximum of $13,500 over a four-year period. The funds are paid directly to you rather than to the school so that they may be  spent on books, supplies, fees, or tuition as needed.