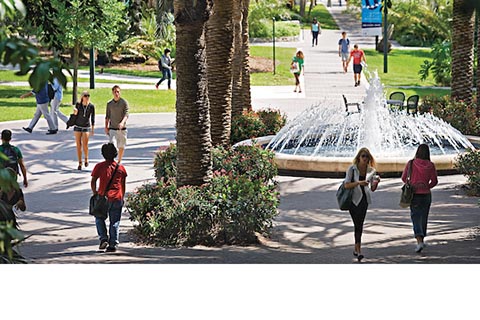 With the cost of tuition sky-high and climbing, most families need to secure funds from external sources to help pay for a college education. The most easily accessible and largest source of financial aid is the Federal government, which awarded $46.4 billion to students in the 2020-21 academic year. Over 36% of undergraduates received an average of $8,285 in Federal loan funds and 42% of them received an average of $5,179 in Federal grant funds. Student aid awarded by state governments, although totaling less, is another major source of funds. States awarded $14.2 billion to 33.6% of the national college student population last year.

In 2020-21, states spent an average of $1,051 per full-time student on financial aid. This continues a trend that began in 1995 of rising state aid for students. State budgets have been reduced due to the decline in revenue caused by the pandemic, so the rising trend in state aid may flatten out in the near future. In any case, state student aid programs will continue to play a key role in increasing access to college for students in financial need. In addition, most states also provide merit-based grants aid for academic high achievers.

While students have until the end of June over a year after the FAFSA first becomes available to them to apply for Federal aid, a state’s deadline for the FAFSA may be earlier. Students should learn the deadline for their state. They may need to file their FAFSA with the ED before the Federal deadline in order to get their application for state aid in on time.

Almost every state education agency has at least one type of grant available to resident students, and many offer a range of other student aid programs. Eligibility is usually restricted to students who are state residents and enrolled in a community college in the state or a 4-year state college or university. Exceptions include participants in a regional college tuition discount program.

Some states offer much more grant aid to resident students than other states. Montana, for example, offers the least aid among the states, providing an average of only $10 per undergraduate student. In contrast, Georgia provides the most with $2,370 per student.
Grants, both need-based and merit-based, are only one component of financial aid in most states. A state may offer a range of other aid programs such as scholarships, student loans, tuition assistance programs, tuition waivers, emergency assistance grants, and child-care.

The first column of Table A, below, ranks each state according to the total value of student financial aid awarded in 2020-21. The second column provides the portion of total aid which is reserved for students in financial need. The third column is total student aid, which is comprised of all types of programs listed above.

A state’s public policy is to advance access to higher education for residents of their own state. But instead of excluding non-residents, they allow a certain number of them to enroll for the sake of creating a more diverse student body on their campuses. Diversity is considered to be a desirable and positive factor in the education of all students. However, in fairness to its own taxpayers, tuition rates paid by in-state residents are set significantly lower at state institutions than the rates paid by out-of-state residents.

To mitigate this cost differential for some out-of-state students, many states participate in programs that allow residents to attend college in neighboring states without having to pay full out-of-state tuition. The largest college tuition discount programs are noted below:

Students from Indiana, Kansas, Michigan, Minnesota, Missouri, Nebraska, North Dakota, and Wisconsin may be eligible for tuition reduction at certain Midwest public and private institutions through the Midwest Student Exchange. The Illinois state university system recently ceased participation in the exchange, but certain institutions may continue to participate in it at their own discretion.

The New England Regional Student Program enables New England residents to enroll in out-of-state New England public institutions at a discount. Students are eligible when they enroll in an approved major that is not offered by public institutions in their home state. More than 700 undergraduate and graduate degree programs are offered. Participating states are Connecticut, Maine, Massachusetts, New Hampshire, Rhode Island and Vermont.

The Tuition Assistance Program (TAP) is a financial aid program that helps families who reside in New York pay college tuition. A student may receive from $500 to $5,000 annually from TAP to attend a state institution. Undergraduates in bachelor’s degree programs can receive four years of TAP funding if they’re full-time students. TAP funds are grants, so they don’t need to be repaid.