Simplified FAFSA To Be Released in July 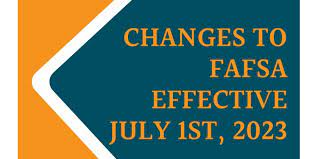 The FAFSA Simplification Act was signed into law on December 27, 2020, as part of the Omnibus Act for 2021. The purpose of the FAFSA Simplification Act is to make it easier for students to complete the FAFSA form and to make the allocation of Federal student aid fairer. When fully implemented, the revised FAFSA will be a substantial improvement over the current version, especially for low-income college applicants.

There were long-standing concerns in Congress that the length and complexity of the FAFSA form and the lack of transparency and predictability of its outcomes discouraged college enrollment. Legislative action was not taken during several consecutive sessions of Congress even though the goal of improving the FAFSA had strong bipartisan support in both houses. It proved to be a more complex matter than anticipated due to the many social forces and factions that bear upon college education.

When the Act was passed in 2020, Congress recognized that much time would be needed to prepare for the sweeping changes in the legislation. At the time of passage, the Act’s provisions were not scheduled to become effective until July 1, 2023. In June 2021, only six months after enactment the legislation, the U.S. Education Department’s (ED) Office of Federal Student Aid (FSA) announced that the FAFSA Simplification Act would not be implemented in full until the 2024-25 academic year, one year after the date stipulated in the legislation.

In a press release in mid-2021, Richard Cordray, Chief Operating Officer of the FSA announced that, “This phased approach will improve the delivery of student financial aid as quickly as possible without limiting FSA’s ability to offer the FAFSA form and to provide Federal student aid. It will also help FSA and our partners manage the development timelines, process, guidance updates, and communications requirements generated by these extensive changes.”

Although full implementation has been postponed for a year, some changes included in the FAFSA Simplification Act have already been adopted. These include:

As currently scheduled, the new FAFSA will first become available for use by students online at the FSA website (FAFSA.gov) on October 1, 2022. This version will be required for Federal student aid consideration for the 2023-24 academic year. This is good news for prospective college students since there are many provisions in the new FAFSA that will be advantageous to them.

There is the potential for problems, however, in the shared system through which FAFSA information is provided by students, processed by the FSA, and acted upon by colleges. A study by the National Association of Student Financial Aid Administrators (NASFAA) shows that over half of college administrators report that they’re not prepared to handle the upcoming changes and that they anticipate problems. The majority of respondents said that their greatest hurdle will be shifting from the Estimated Family Contribution, the current process by which a student’s eligibility for Federal aid is determined, to the Student Aid Index, which is the new process. In addition, administrators foresee difficulty with the new Pell Grant eligibility formula. Many also expressed concern over the “Simplified Needs Test” methodology, which causes assets on the FAFSA to be ignored for eligible applicants.

Vivian Wong of Oracle Higher Education Development, the organization that conducted the survey for NASFAA, is quoted as saying, “The need for financial aid reform has never been more pressing, with schools and students still grappling with the economic impacts of the pandemic. While these [FAFSA] provisions are an important first step in expanding access to education, institutions can’t enact this change alone.”

Well-tested, operational systems need to be in place before the transition to the new FAFSA can be successfully conducted. Federal agencies, private sector IT providers, and college administrators need to step up their cooperation with one another to be ready to switch over to the new FAFSA by June 30, 2024.