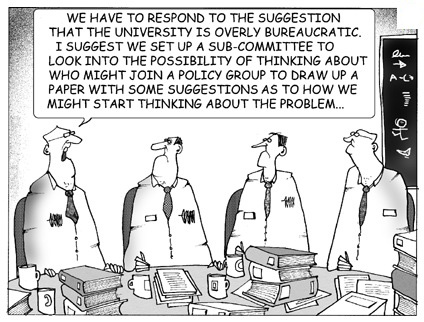 The astoundingly rapid rise in college tuition in past decades is well known. Perhaps less well known is the increasing unwillingness of students to pay exorbitant tuition prices at all but a few elite institutions. Applications and enrollments have declined at most colleges, yet tuition, after a brief pandemic-induced hiatus, are increasing rapidly again. How can the education industry increase prices in the face of falling demand for its product? This is a topic that students and families seeking to pay for a college education in the near future may wish to follow.

Many reasons have been given over the years to account for excessive rise in tuition at both public and private institutions. These include:

Although an entire post could be devoted to each of the cost factors above to explain their impact, administrative bloat is the sole topic of this post because of its controversial nature because the rising administrative costs are perceived to displace instructional costs — money spent directly on educating students.

During the 1980-1981 academic year, public and private colleges spent $20.7 billion in total on instruction and $13 billion on academic support, student services, and institutional support combined, according to data from the National Center for Educational Statistics. By the 2014-2015 academic year, total instructional costs had climbed to $148 billion while the same grouping of administrative expenses had risen to $122.3 billion.

Why So Many Administrators?

Staggering college tuition prices and the resulting massive student debt are forcing universities to reevaluate their spending – and the issue of administrative bloat is earning more and more attention. Researchers investigate the causes, columnists pen fiery op-eds, and students protest soaring tuition prices, all asking the same question: Why are universities hiring so many administrators?

There are legitimate factors that drive colleges to hire more administrators. These reflect a sharp rise in government regulations, increasing competition among colleges for applicants under changing demographic conditions, and a student population with different needs than past ones.

For example, there’s been an avalanche of Federal and state regulations that colleges must now accommodate. These include the Clery Act, which requires campuses to report all crimes; new Title IX regulations that govern the handling of sexual assault; and Family Educational Rights and Privacy Act requirements for providing educational records. In 2013 and 2014 alone, the U. S. Department of Education released directives on 10 sets of issues, ranging from rules on teacher preparation programs to Cost of Attendance – Net Price Calculator requirements to specific procedures for FAFSA verification. Complying with these rules requires additional staff and additional money and the resources required to do so are not insignificant

Another major driver of administrative spending emanates from the intensifying competition among colleges to attract enrollees with new student-friendly residential quarters and facilities such as sports and recreational sites, performance venues, and student social centers.

The Problem In a Nutshell

Most top college administrators earn compensation on par with their for-profit private sector peers, but the vast majority of colleges are non-profit entities. Although they’re accountable to Boards of Trustees, they aren’t held closely to account by shareholders seeking returns on their investments, as corporations are. Their ultimate goal is to educate students, not to turn a profit.

In term of handling money judiciously, this is the crux of the problem. “Businesses are very attuned to the problem of overhead, and they have a clear financial interest in periodically restructuring their organizations to eliminate excess bureaucracy — they must preserve profitability.”, according to Robert Martin in Forbes Magazine (Sept. 2019). The problem, Martin goes on to say, is tied to the fact that college administrations aren’t incentivized to keep overhead down. In fact, raising tuition to cover ever-higher overhead may result in a college being perceived as a better institution academically. College is an “experience good” — you can’t fully appreciate it until you experience it — high prices suggesting high quality can be a marketing tool for a college to make itself more appealing to potential applicants. A commercial firm could never benefit from poor cost control.

Economists as well as other observers of higher education in the U.S. remain concerned about whether increasing administrative spending detracts from the fundamental mission of college – giving students the knowledge they need to prepare themselves for the world beyond. “The two big cost drivers are bureaucrats and buildings – obviously neither of those are directly going to the classroom experience. They actually look at the classroom as a place where they can conserve money.” Says Todd Zywicki, a professor at George Mason University and the author of “The Changing of the Guard: The Political Economy of Administrative Bloat in American Higher Education.”